The European Standard applicable to the construction and related testing of drains and sewers pipelines usually buried in the ground and usually operating under gravity but up to 0,5 kPa when surcharged, is EN1610 which is for Construction and testing of drains and sewers. PlugCo designs and manufactures the inflatable pipe plugs and pipe test plugs in a way to be suitable for EN1610 Standard.

The testing times for pipelines excluding manholes and inspection chambers are given in Table 3 in EN1610 standard in relation to pipe size and testing methods (LA; LB; LC; LD). Test shall be performed according to the method specified by the owner of the network or the designer. Suitably shaped inflatable pipe plugs shall be used in order to avoid errors arising from the test equipment not being airtight. Air testing can be dangerous for the personnel. The choice of the test pressure shall take into account the risk induced by the test, for personnel as well as the pipelines under test. National safety regulations shall be considered. An initial pressure approximately 10 % in excess of the required test pressure, po, shall first be held for approximately 5 min. The pressure shall then be adjusted to the test pressure shown in Table 3 in the Standard. The equipment used for measuring the pressure drop shall allow a measurement with an accuracy of 10% of the pressure difference. The accuracy of measurement of time shall be ± 2,5 s.

The Table 3, including test pressure, pressure drop and testing times for testing with air, is available in EN1610. 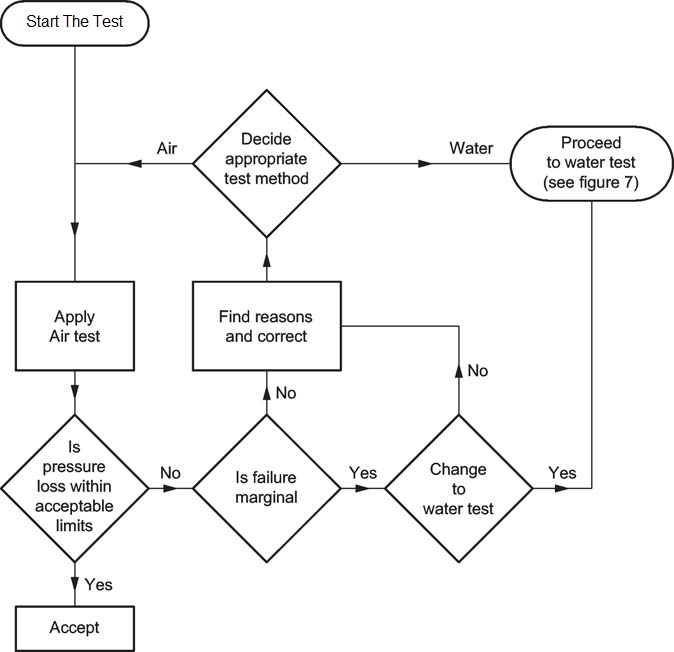 You can check how to make an air leak test using PlugCo Pipe Plug and Pipe Test Plug from the below video.

For the pipeline, excluding manholes and inspection chambers, the test pressure shall be the pressure equivalent to or resulting from filling the test section up to the ground level of the downstream or upstream manhole, as appropriate, with a maximum pressure of 50 kPa and a minimum pressure of 10 kPa measured at the invert of the pipe.

In the event of a single or continued air test failure, recourse to a water test is allowed and the result of the water test alone shall be decisive. For manholes and inspection chambers testing time shall be half the time for an equivalent diameter pipeline. The test conditions shall be adapted in accordance with Table 3. Negative air pressure testing may be used, if a specific procedure is established in the design.

Unless specified otherwise by the designer the reference level to test manholes and inspection chambers is the top edge of the taper or of the chamber unit below cover slab. Test pressure shall correspond to a filling height to approximately 10 cm below this reference level.

Test requirements Pressure shall be maintained within 1 kPa of the test pressure defined in 13.3.1, e.g. by adding water. The variation of volume of water during the test shall be measured with an accuracy of 0,1 l and recorded with the head of water at the required test pressure.

The test requirement is satisfied if the variation of volume of water during the test is not greater than:

Testing time: The testing time shall be (30 ± 1) min. Test may be stopped if the total amount of water allowed to be added during 30 min is exceeded. 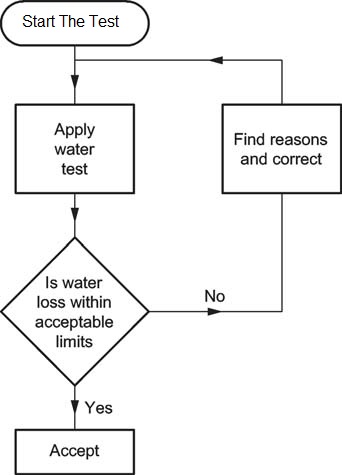 You can check how to make a water leak test using PlugCo Pipe Plug and Pipe Test Plug from the below video.

PlugCo provides training and on-site supervision for both applications: water and air leak test. You can contact us to get more details.