A pipeline is a structure designed to transport fluid materials such as liquids, gases, multiphase mixtures, under specific pressure and over long distances.

Each type of pipeline has special equipment used to test or repair the pipes, and the choice of these equipment is based on the media inside the pipe. As an example, to seal gravity lines or to perform a leak test on water or wastewater pipelines, the Inflatable Pipe Plugs, which made of reinforced SBR Rubber, are considered as the best solution.

Within the petrochemical applications, where hydrocarbons are present in liquid or gaseous form, inflatable plugs, with petrochemical resistance, are frequently used for a variety of applications such as debris blocking, leak testing, low pressure hydrostatic testing, blocking the release of hydrocarbon gases and various plumbing operations. For this, if the media or the material contained inside the line is Hydrocarbon, Gas, oil … other type of plugs is used.

In general, pipes carrying hydrocarbons require stoppers with gas-resistant rubbers. Therefore, to seal or apply a leak test in such a pipe, a special type of plug must be used. Otherwise, the plug will be damaged due to the cracks on the rubber, and then burst which may cause serious damage or even death.

PlugCo as the biggest manufacturer of Plugs, used to test or block the pipeline during applications, provides Gas Pipe Plugs which made of high-quality nitrile rubber that has an excellent resistance to petrochemicals and it’s used to seal and block pipelines where the media is hydrocarbon, gas, oil or petroleum. 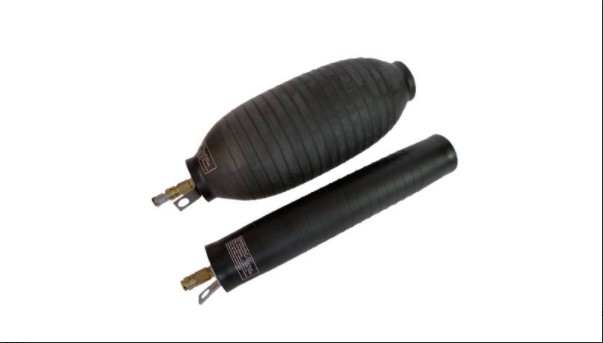 The standard models manufactured by PlugCo are cylindrical and multi-dimensional ranging from 35 mm to 2400 mm in diameter, with a high quality, petrochemical resistant rubber layer.

Is it possible to use Inflatable plugs instead of Gas plugs in hydrocarbon applications?

PP models and GP models, are the primary types of PlugCo’s range of products. The difference between these two models is the rubber type, as one resists against chemicals and the other is used for gravity, sewage, or drainage pipeline.

However, during a petrochemical or hydrocarbon application it is prevented and dangerous to use normal inflatable pipe plugs, as they are not resistible against chemicals. This application will damage the Pipe Plug, which may burst and result in injuries or even death.

As, wholesaler of plugs, we faced a situation with a customer; he purchased the PP Model for his sewage pipelines, but he used them later for a hydrocarbon application, which damaged the Plugs as shown in the following photo. Our customer was lucky in this case, as only the Plugs had been damaged. Otherwise, they could have been burst and resulted in serious bodily injuries or worse.

PlugCo provided a third party certificate from TÜV SÜD for inflatable pipe plugs to a Tunisian Petroleum company. The 100 % witness test was for 20 pieces of Gas Plugs (GP), size of 100mm-200mm (4”-8”), require a working Pressure of 2,5 bar (36 Psi), and can hold a maximum back pressure of 1,0 bar (14,5 Psi). The tests have been successfully completed.